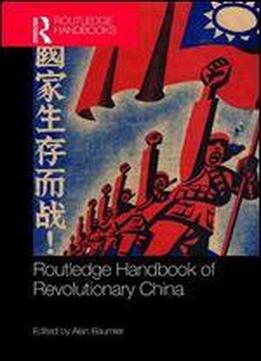 The Routledge Handbook of Revolutionary China covers the evolution of Chinese society from the roots of the Republic of China in the early 1900s until the end of the Cultural Revolution in 1976. The chapters in this volume explain aspects of the process of revolution and how people adapted to the demands of the revolutionary situation. Exploring changes in political leadership, as well as transformation in culture, it compares the differences in experiences in urban and rural areas and contrasts rapid changes, such as the war with Japan and Communist 'liberation' with evolutionary developments, such as the gradual redefinition of public space. Taking a comprehensive approach, the themes covered include: - War, occupation and liberation - Religion and gender - Education, cities and travel. This is an essential resource for students and scholars of Modern China, Republican China, Revolutionary China and Chinese Politics.