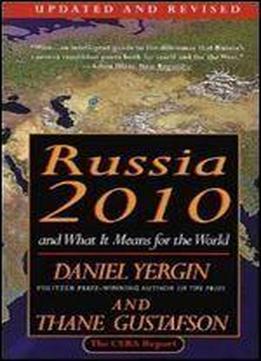 2010: Russia disintegrates as its frontier regions rebel or drift into the orbit of neighboring countries. 2010: Russia is invigorated by an economic chudo "miracle" that turns it into a thriving exemplar of the free market. 2010: Russia becomes a grim military dictatorship, bent on expansion. This brilliant and visionary book, which is based on a confidential report by the international consulting firm CERA, offers several persuasively detailed scenarios of Russia's future. Using the management technique of "scenario planning" and drawing on an extensive knowledge of Russia's political and economic history, Daniel Yergin and Thane Gustafson have produced a study that is already shaping the investment strategies of major corporations and that will become an essential text in the policy debates about the next century. Russia 2010 captures in a timely way the changes shaking Russia and the former Soviet Union after Communism. The result is one of those rare books that not only predict the future but have the power to change it.