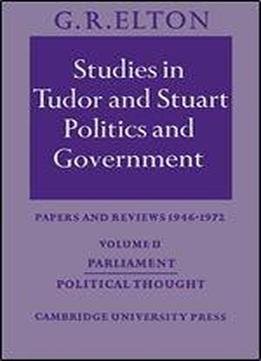 The papers collected in these volumes revolve around the political, constitutional and personal problems of the English government between the end of the fifteenth-century civil wars and the beginning of those of the seventeenth century. Previously published in a great variety of places, none of them appeared in book form before. They are arranged in four groups (Tudor Politics and Tudor Government in Volume I, Parliament and Political Thought in Volume II) but these groups interlock. Though written in the course of some two decades, all the pieces bear variously on the same body of major issues and often illuminate details only touched upon in Professor Elton's books. Several investigate the received preconceptions of historians and suggest new ways of approaching familiar subjects. They are reprinted unaltered, but some new footnotes have been added to correct errors and draw attention to later developments.