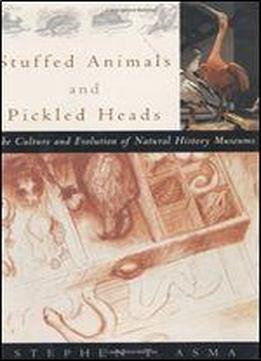 The natural history museum is a place where the line between "high" and "low" culture effectively vanishes where our awe of nature, our taste for the bizarre, and our thirst for knowledge all blend happily together. But as Stephen Asma shows in Stuffed Animals and Pickled Heads, there is more going on in these great institutions than just smart fun. Asma takes us on a wide-ranging tour of natural history museums in New York and Chicago, London and Paris, interviewing curators, scientists, and exhibit designers, and providing a wealth of fascinating observations. We learn how the first museums were little more than high-toned side shows, with such garish exhibits as the pickled head of Peter the Great's lover. In contrast, today's museums are hot-beds of serious science, funding major research in such fields as anthropology and archaeology. Asma also points out that these museums actively shape our perception of nature, and that these efforts are swayed as much by politics as by science. In countless exhibits, for instance, the idea of the traditional nuclear family is evident in displays of everything from extinct animals to grizzly bears (in nature, alas, the male bear is more likely to devour its young than to nurture them). Where else but at a natural history museum could you find a T. rex, a high-tech planetarium, a Native American totem pole, and flesh-eating beetles all under one roof. And in Stuffed Animals and Pickled Heads, Stephen Asma reveals that what we don't see the scientific research that is going on backstage is just as fascinating as the exhibits on display.