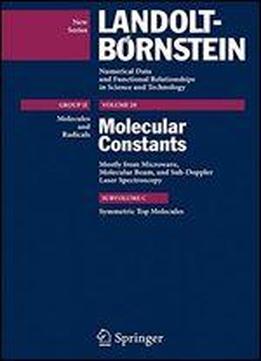 This is subvolume C of the Landolt-Brnstein Volume II/29 "Molecular Constants Mostly from Microwave, Molecular Beam, and Sub-Doppler Laser Spectroscopy", which is planned to appear as a series A, B, C and D1 and D2 for the diamagnetic, and E for the paramagnetic linear and polyatomic species, respectively. Like in the preceding volumes II/19 and II/24, which have appeared in 1992 and 1999, the diamagnetic substances are arranged in the manner suggested by Hill ("Hill's system", 1900), meaning an almost strict alphabetical order details are given in the General Introduction on the following pages. The ionic species are included in the alphabetical arrangement of the neutral ones in each table. In the preface to the previous volume II/24 we had noted: It is somewhat surprising that the trend of reducing spectroscopic activities in universities and other research institutes has not led to a lower production rate of pertinent molecular literature data during the last say ten years. It seems that the opposite is true. The number of studies of Van der Waals complexes is still increasing, and naturally also their complexity. Similarly, the "normal" molecules studied under high-resolution conditions became more complicated and flexible, and interesting effects like inner hydrogen bonding have been investigated. The number of figures used to illustrate the molecular conformational structures is, therefore, also larger than in the foregoing volumes.