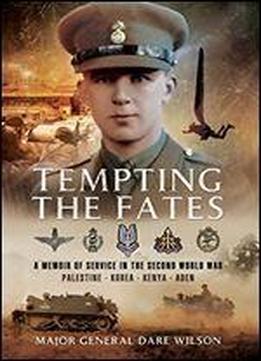 Tempting The Fates: A Memoir Of Service In The Second World War
by Dare Wilson / 2016 / English / PDF

General Dare Wilson saw action in France 1940 (Dunkirk), Italy and North West Europe (where he won his MC) with the Northumberland Fusiliers and later the Recce Regiment. He then served in Palestine and Korea which he rates as the most vicious war he fought in. He was picked to command 22 SAS and was responsible for basing them at Hereford. His account of the world record-breaking free fall jump free falling from 34,000 feet makes thrilling reading one member died. He went on to fight the Mau Mau in Kenya and was in the last party to leave Aden when we withdrew in 1968. Dare then learnt to fly helicopters and commanded the fledgling Army/Air Corps. We believe that this is one of the most enthralling of the many superb memoirs we have published. Certainly it is the widest in its scope and makes for thrilling reading.