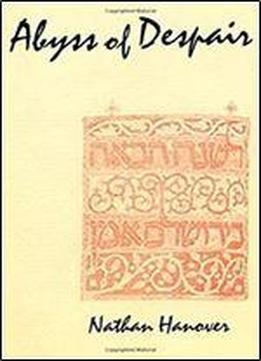 The Abyss Of Despair (yeven Metzulah): The Famous 17th Century Chronicle Depicting Jewish Life In Russia And Poland During The Chmielnicki Massacres Of 1648-1649
by Nathan Hanover / 1983 / English / PDF

Providing a gripping, first-hand account of the Chmielnicki massacres in 1648-58, in which tens of thousands of Jews perished in Poland and the Ukraine, Rabbi Nathan Hanover describes the events themselves and their effect on European Jewry. Hanover's description of the atrocities commited* by Chmielnicki and his hordes makes it clear that they set the precedent for Hitler's torture chambers. Hanover's account of the events understood in their historical context 'shows how humans can transcend tragedy and rebuild their lives, developing new ways to express their heritage and culture. Professor Helmreich, in his new introduction, describes the- period of relative peace and prosperity for the Jews immediately preceding the massacres. He traces some of the important effects the massacre had on later Jewish history, such as the rise of Messianic and Hasidic movements in the seventeenth and eighteenth centuries and the migration of Jews back toward the west, where they were situated when the Enlightenment swept through Europe.