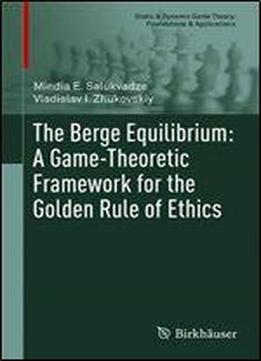 The Berge Equilibrium: A Game-theoretic Framework For The Golden Rule Of Ethics
by Mindia E. Salukvadze / 2020 / English / PDF

The goal of this book is to elaborate on the main principles of the theory of the Berge equilibrium by answering the following two questions: What are the basic properties of the Berge equilibrium? Does the Berge equilibrium exist, and how can it be calculated? The Golden Rule of ethics, which appears in Christianity, Judaism, Islam, Buddhism, Confucianism and other world religions, states the following: Behave towards others as you would like them to behave towards you." In any game, each party of conflict seeks to maximize some payoff. Therefore, for each player, the Golden Rule is implemented through the maximization of his/her payoff by all other players, which matches well with the concept of the Berge equilibrium. The approach presented here will be of particular interest to researchers (including undergraduates and graduates) and economists focused on decision-making under complex conflict conditions. The peaceful resolution of conflicts is the cornerstone of the approach: as a matter of fact, the Golden Rule precludes military clashes and violence. In turn, the new approach requires new methods in particular, the existence problems are reduced to saddle point design for the Germeier convolution of payoff functions, with further transition to mixed strategies in accordance with the standard procedure employed by E. Borel, J. von Neumann, J. Nash, and their followers. Moreover, this new approach has proven to be efficient and fruitful with regard to a range of other important problems in mathematical game theory, which are considered in the Appendix.