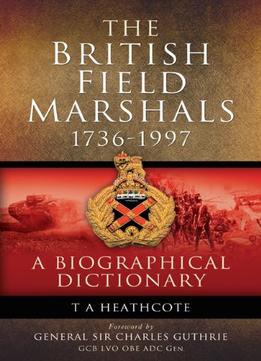 Whether any advantage or benefit will be drawn from the suspension - or effective abolition - of the rank of Field Marshal is debatable. What is certain, however, is that Dr Tony Heathcote's idea of compiling a definitive biographicaldictionary of holders of this illustrious rank since its introduction by George II in 1736, is opportune and inspired. Those readers who anticipate a dry recitation of bare facts and statistics are in for a disappointment. A reference work this may be but the author, by dint of his depth of knowledge, has created a shrewd and highly readable commentary as well. As General Sir Charles Guthrie (the first soldier to be denied promotion to Field Marshal on appointment to Chief of Defence Staff) observes in his Foreword, this book embraces the history of the British Army over the last 250-300 years. It covers not only the careers of key individuals but provides an understanding of their contribution to the successes and failures of our military past. The diversity of personalities, who have only the honour of wearing the coveted crossed batons in common, is fascinating. Alongside the household names of the great strategists and distinguished leaders lie little known and forgotten figures, who gained their exalted rank by either luck, accident of birth or diplomatic gesture. The British Field Marshals merits a place on the bookshelf of any military historian but is likely to be found on his or her bedside table. Whether or not the rank is ever resurrected, as it has been in the past and as many will hope it will be again, this delightful and useful book will remain the authoritative guide to all those who have held the highest military rank in the British Army