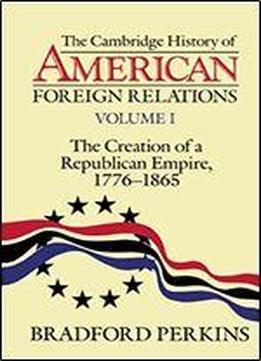 The Cambridge History Of American Foreign Relations: Volume 1, The Creation Of A Republican Empire, 1776-1865
by Bradford Perkins / 1995 / English / PDF

The Creation of a Republican Empire traces American foreign relations from the colonial era to the end of the Civil War, paying particular attention not only to the diplomatic controversies of the era but also to the origins and development of American thought regarding international relations. The primary purpose of the book is to describe and explain, in the diplomatic context, the process by which the United States was born, transformed into a republican nation, and extended into a continental empire. Central to the story are the events surrounding the American Revolution, the constitutional Convention, the impact on the United States of the European wars touched off by the French Revolution, the Monroe Doctrine, the expansionism of the 1840s, and the ordeal of the Civil War.