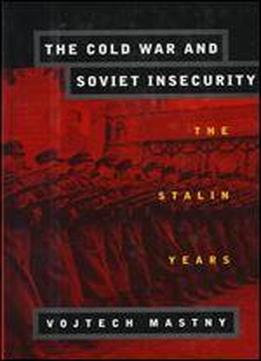 The child of a small coup rather than an extension of popular will, the Soviet State was intrinsically insecure, its leaders ever fearful of internal and external threats. They did not feel that their regime would be safe until the revolution triumphed abroad, convinced that the outside world was implacably hostile. None felt this more strongly than Stalin. Indeed, as eminent historian of the Soviet Union Vojtech Mastny argues, it was Stalin's insatiable craving for security, more than anything else, that was the root cause of East-West tensions and the Cold War. In The Cold War and Soviet Insecurity, the long-awaited sequel to his acclaimed work, Russia's Road to the Cold War, Mastny offers a masterful history of the birth of the Cold War, drawing on extensive research in newly opened Soviet archives. Here Stalin takes center stage during the critical years 1947 to 1953, stamping East-West tensions with his personal blend of paranoia, ideology, ruthlessness, and wishful thinking. Indeed, given Stalin's personality and his unquenchable thirst for security, Mastny argues, the Cold War arose as an "unexpected but predetermined" event--far from planned, yet scarcely avoidable. As Mastny unfolds the history of this climactic era, he offers a new understanding of important aspects of the developing conflict--throwing sharp light, for example, on the Kremlin's relationship with foreign Communist parties (in both Eastern and Western Europe) and its very different responses to Tito and Mao. Indeed, the break with Tito demonstrates the depths of Stalin's paranoia: the Yugoslav leader actually thought he was doing Stalin's will, when all along his very similarity to Stalin alienated the Soviets--a case of "incompatible affinities," as Mastny writes. Here too is a fresh view of the outbreak of the Korean War: Stalin not only approved the attack, he actively armed and prepared the North's Communist army. And yet, he strangely left the most crucial war decisions to the North Koreans. Mastny brilliantly analyzes these events, showing the impact of the fighting in Korea on European relations--especially the question of divided Germany. And throughout the volume, Mastny offers many thought-provoking observations--he shows, for instance, that U.S. covert operations (especially the attempted infiltration of armed agents into Eastern Europe) may have had greater historical impact, by reinforcing Stalin's paranoia, than the better-known Soviet espionage efforts in the West and that the West's failure to exploit instability--especially in East Germany--after Stalin's death, may have allowed a shaky Soviet regime to regain its footing and survive for another forty years. Russia's Road to the Cold War provided the definitive portrait of Stalin's foreign policy during World War II. Now, in The Cold War and Soviet Insecurity, Mastny provides an equally superb account of Stalin's foreign policy during his last years. Combining important new research with the fascinating insight of one of the leading authorities on Soviet affairs, this authoritative volume illuminates a crucial period in recent world history.