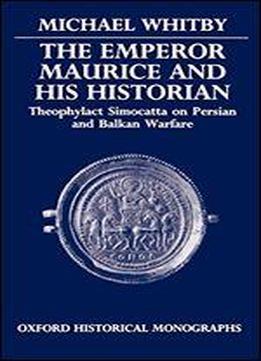 The Emperor Maurice And His Historian: Theophylact Simocatta On Persian And Balkan Warfare
by Teofilacto Simocates / 1988 / English / PDF

Theophylact Simocatta, the last historian of classical antiquity, has in the past deterred investigators by the idiosyncrasies of his style. Through examination of Theophylact's narrative, and collation with other available evidence, Dr Whitby has unpicked the obscurities, biases, and errorsto clear the way for a more accurate appreciation of the events of the reign of Emperor Maurice (582-602). Maurice's reign witnessed great struggles as the Romans attempted to defend their traditional frontiers on the Danube and in Mesopotamia and Armenia. In both areas, Maurice achieved great successes: in the Balkans, migrations of Slavs and invasions by Avars were held in check, if not completelyhalted and in the east the emperor reinstated Khusro II, the legitimate Persian king, and attempted to forge a long-term peace. These events are important both in the historical geography of the Balkans and eastern frontier, and for understanding the fate of the post-Justinian Roman Empire. Whitbyreveals the History as a work worthy of serious study in its own right as a product of the last flowering of classical Greek literature in antiquity.