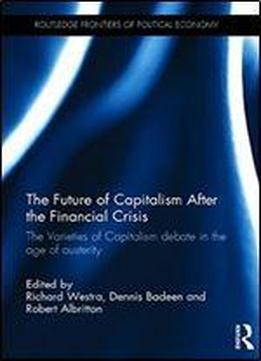 The Future Of Capitalism After The Financial Crisis: The Varieties Of Capitalism Debate In The Age Of Austerity
by Richard Westra / 2017 / English / PDF

The Future of Capitalism After the Financial Crisis: The Varieties of Capitalism Debate in the Age of Austerity contains thirteen world leading political economists writing from within eight different countries who critically analyze the current crisis tendencies of capitalism both globally and in particular countries. Given the likelihood of an increasingly crisis prone future for capitalism, it is important not only to rethink capitalism in its current manifestations or varieties. It is also important to rethink research methods and conceptual frameworks in preparation for understanding an increasingly rocky future in which capitalism itself could go the way of the many species that in the past were endangered only to become extinct. More and more titles of books and articles are suggesting that capitalism or perhaps civilization itself is endangered if we do not make radical changes in the near future. This book breaks with academic path dependency and attempts to open new vistas of political economy and of multidisciplinary analysis that are crucially important if our thought processes are to be effective in a world in jeopardy. The varieties of capitalism (VoC) debate itself came into being as the Soviet Union unraveled. It drew in scholarship from a cross-section of Marxian and heterodox political economy. The key argument of VoC was that if capitalism was the only global option then those on the Left must get involved in policy discussions on how capitalist economies can be fashioned to become competitive as well as progressive. However, the financial crisis has seen policy across the advanced economies veer toward competitiveness coupled with austerity. The lesson for the Left is that alternatives to capitalism must be sought in the here and now.