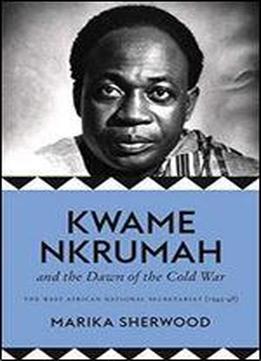 The Kwame Nkrumah And The Dawn Of The Cold War: The West African National Secretariat (1945-48)
by Marika Sherwood / 2019 / English / EPUB

The West African National Secretariat (WANS) has largely been forgotten by history. Founded by Kwame Nkrumah in London in 1945, and enduring for only three years, the scope of its influence as an organization is perhaps eclipsed by its significance in the story of the Cold War in Africa. Marika Sherwood shares this story: drawing on unprecedented archival research, and newly released MI5 files, she looks at the role played by Kwame Nkrumah, the WANS, and other pan-African organizations in bringing Cold War politics to bear on anti-colonial struggles. Contrary to the belief held by liberation movements at the time that it was only their respective colonizers they had to deal with, Sherwood demonstrates that colonial powers colluded with the US in order to control the burgeoning struggles for independence. By (often wrongly) labelling African nationalists as communists in their efforts to contain decolonization, Western powers exacerbated the development of the Cold War. Providing a rich exploration of a neglected history, this book sheds light for the first time on a crucial historical moment in the history of West Africa and the developmental trajectory of West African nationalism.