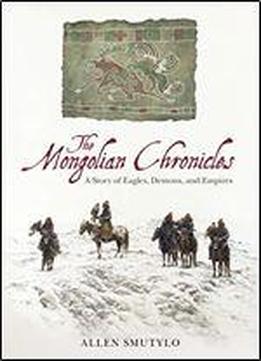 The Mongolian Chronicles: A Story Of Eagles, Demons, And Empires
by Allen Smutylo / 2019 / English / EPUB

The Mongolia you never knew existed. Mongolia beyond Genghis Khan. In the shadows of the Altai Mountains live the Kazakh nomads of western Mongolia. These hard-living nomads survive on windswept steppes, grazing their herds and keeping an ancient practice alive: hunting not with traps or guns, but on horseback with golden eagles. The Mongolian Chroniclesrecounts a story of this untamed world, seen through the eyes of artist, writer, and traveller Allen Smutylo. Smutylo lived with seven eagle hunters and their families for several weeks over two years, affording him rare insight into a disappearing culture. His extraordinary narrative is set within the context of Mongolia's turbulent past -- the long shadow cast by the empire of Genghis Khan, the deprivations of early twentieth century warlords-cum-mystics -- and its protean present, where ancient customs and shamanistic beliefs exist among an increasingly urbanized people. Smutylo's vivid prose and powerful artwork portray a Mongolia of contradictions and extremes. Readers will encounter a country with a vast wilderness that nonetheless has one of the most polluted capitals on earth a modern economy in which tent-dwelling nomads still rely on their animals for survival a people unchanged for millennia, yet recognizing that their way of life may disappear with their generation.