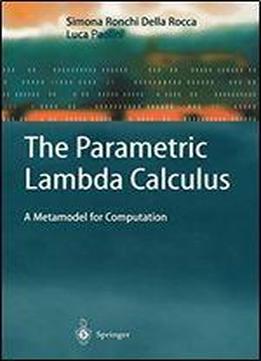 The Parametric Lambda Calculus: A Metamodel For Computation
2004 / English / PDF

The A-calculus was invented by Church in the 1930s with the purpose of sup plying a logical foundation for logic and mathematics [25]. Its use by Kleene as a coding for computable functions makes it the first programming lan guage, in an abstract sense, exactly as the Thring machine can be considered the first computer machine [57]. The A-calculus has quite a simple syntax (with just three formation rules for terms) and a simple operational seman tics (with just one operation, substitution), and so it is a very basic setting for studying computation properties. The first contact between A-calculus and real programming languages was in the years 1956-1960, when McCarthy developed the LISP programming language, inspired from A-calculus, which is the first "functional" program ming language, Le., where functions are first-dass citizens [66]. But the use of A-calculus as an abstract paradigm for programming languages started later as the work of three important scientists: Strachey, Landin and B6hm.