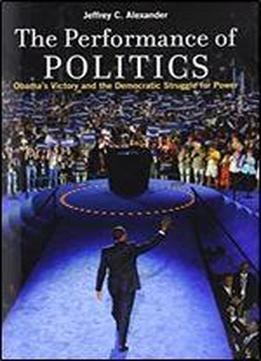 The Performance Of Politics: Obama's Victory And The Democratic Struggle For Powe
by Jeffrey C. Alexander / 2010 / English / PDF

Contemporary observers of politics in America often reduce democracy to demography. Whatever portion of the vote not explained by the class, gender, race, and religious differences of voters is attributed to the candidates' positions on the issues of the day. But are these the only or even the main factors that determine the vote? The Performance of Politics develops a new way of looking at democratic struggles for power, explaining what happened, and why, during the 2008 presidential campaign in the United States. Drawing on vivid examples taken from a range of media coverage, participant observation at a Camp Obama, and interviews with leading political journalists, Jeffrey Alexander argues that images, emotion, and performance are the central features of the battle for power. While these features have been largely overlooked by pundits, they are, in fact, the primary foci of politicians and their staff. Obama and McCain painstakingly constructed heroic self-images for their campaigns and the successful projections of those images suffused not only each candidate's actual rallies, and not only their media messages, but also the ground game. Money and organization facilitate the ground game, but they do not determine it. Emotion, images, and performance do. Though an untested senator and the underdog in his own party, Obama succeeded in casting himself as the hero and McCain the anti-hero and the only candidate fit to lead in challenging times. Illuminating the drama of Obama's celebrity, the effect of Sarah Palin on the race, and the impact of the emerging financial crisis, Alexander's engaging narrative marries the immediacy and excitement of the final months of this historic presidential campaign with a new understanding of how politics work.