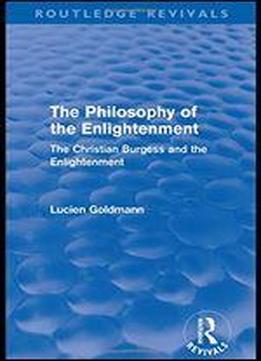 In this reissue, originally published in English in 1973, French philosopher Lucien Goldmann turns his attention to the Enlightenment of the eighteenth century, the great age of liberalism and individualism and analyses the mental structures of the outlook of the philosophes, who showed that the ancien regime and the privileges of the Church were irrational anachronisms. In assessing the strengths and limitations of individualism, Goldmann considers the achievements and limitations of the Enlightenment. He discusses the views of Hegel and Marx and examines the relation between liberal scepticism and traditional Christianity to point the way to the possible reconciliation of the two seemingly incompatible world visions of East and West today.