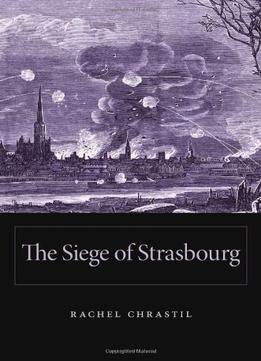 The Siege Of Strasbourg
by Rachel Chrastil / 2014 / English / PDF

When war broke out between France and Prussia in the summer of 1870, one of the first targets of the invading German armies was Strasbourg. From August 15 to September 27, Prussian forces bombarded this border city, killing hundreds of citizens, wounding thousands more, and destroying many historic buildings and landmarks. For six terror-filled weeks, "the city at the crossroads" became the epicenter of a new kind of warfare whose indiscriminate violence shocked contemporaries and led to debates over the wartime protection of civilians. The Siege of Strasbourg recovers the forgotten history of this crisis and the experiences of civilians who survived it. Rachel Chrastil shows that many of the defining features of "total war," usually thought to be a twentieth-century phenomenon, characterized the siege. Deploying a modern tactic that traumatized city-dwellers, the Germans purposefully shelled nonmilitary targets. But an unintended consequence was that outsiders were prompted to act. Intervention by the Swiss on behalf of Strasbourg's beleaguered citizens was a transformative moment: the first example of wartime international humanitarian aid intended for civilians. Weaving firsthand accounts of suffering and resilience through her narrative, Chrastil examines the myriad ethical questions surrounding what is "legal" in war and what rights civilians trapped in a war zone possess. The implications of the siege of Strasbourg far exceed their local context, to inform the dilemmas that haunt our own age–in which collateral damage and humanitarian intervention have become a crucial part of our strategic vocabulary.