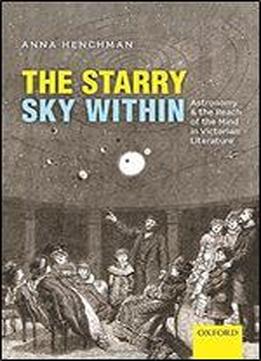 The Starry Sky Within: Astronomy And The Reach Of The Mind In Victorian Literature
by Anna Henchman / 2014 / English / PDF

The Starry Sky Within is an innovative study of the previously unexplored connections between nineteenth-century astronomy and British literature. Nineteenth-century astronomers revealed a cosmos of celestial systems in which nothing was at rest. The sky, consequently, no longer seemed a dome containing the human world, but a staggeringly mobile world extending far beyond the scope of human vision. Henchman shows that the reconceptualization of the skiesgave novelists new spaces in which to get outside the limitations of individual perspectives. Arguing against the idea that literary point of view can ever be either singular, stationary, or stable, Henchmanreveals new links between nineteenth-century astronomy and Victorian novels by Eliot, Dickens, and Hardy. Inspired by wheeling celestial bodies in constantly changing relation to each other, these writers create literary worlds that are characterized by multiple centers of consciousness, perpetual motion, and criss-crossing points of view.