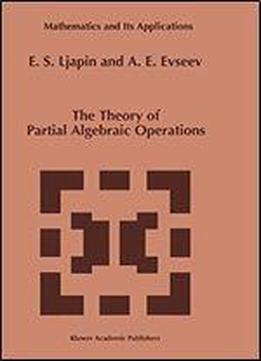 Nowadays algebra is understood basically as the general theory of algebraic oper ations and relations. It is characterised by a considerable intrinsic naturalness of its initial notions and problems, the unity of its methods, and a breadth that far exceeds that of its basic concepts. It is more often that its power begins to be displayed when one moves outside its own limits. This characteristic ability is seen when one investigates not only complete operations, but partial operations. To a considerable extent these are related to algebraic operators and algebraic operations. The tendency to ever greater generality is amongst the reasons that playa role in explaining this development. But other important reasons play an even greater role. Within this same theory of total operations (that is, operations defined everywhere), there persistently arises in its different sections a necessity of examining the emergent feature of various partial operations. It is particularly important that this has been found in those parts of algebra it brings together and other areas of mathematics it interacts with as well as where algebra finds applica tion at the very limits of mathematics. In this connection we mention the theory of the composition of mappings, category theory, the theory of formal languages and the related theory of mathematical linguistics, coding theory, information theory, and algebraic automata theory. In all these areas (as well as in others) from time to time there arises the need to consider one or another partial operation.