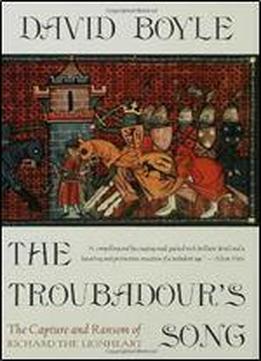 The Troubadour's Song: The Capture And Ransom Of Richard The Lionheart
by David Boyle / 2005 / English / PDF, EPUB

On his long journey home from the Third Crusade, Richard the Lionheart one of historys most powerful and romantic figures was ship-wrecked near Venice in the Adriatic Sea. Forced to make his way home by land through enemy countries, he traveled in disguise, but was eventually captured by Duke Leopold V of Austria, who in turn conveyed him to Henry VI, the Holy Roman Emperor. Henry demanded a majestic ransom, and Richard's mother, Eleanor of Aquitaine, raised the historic sum one quarter of the entire wealth of England and Richard was returned. But a peculiar legend followed him that a troubadour named Blondel, a friend of Richard's, had journeyed across Europe singing a song he knew Richard would recognize in order to discover his secret place of imprisonment. David Boyle recreates the drama of the Third Crusade and the dynamic power politics and personalities of the late 12th century in Europe, as well as the growing fascination with romance and chivalry embodied in the troubadour culture. An evocation of a pivotal era, The Troubadours Song is narrative history at its finest.