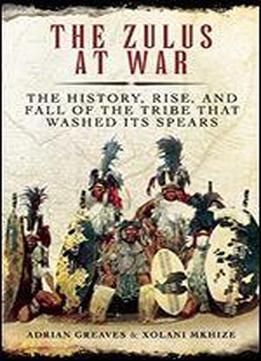 The Zulus At War: The History, Rise, And Fall Of The Tribe That Washed Its Spears
by Xolani Mkhize / 2014 / English / EPUB

By tracing the long and turbulent history of the Zulus from their arrival in South Africa and the establishment of Zululand, The Zulus at War is an important and readable addition to this popular subject area. It describes the violent rise of King Shaka and his colorful successors under whose leadership the warrior nation built a fearsome fighting reputation without equal among the native tribes of South Africa. It also examines the tactics and weapons employed during the numerous intertribal battles over this period. They then became victims of their own success in that their defeat of the Boers in 1877 and 1878 in the Sekunini War prompted the well-documented British intervention. Initially the might of the British empire was humbled as never before by the shock Zulu victory at Isandlwana but the 1879 war ended with the brutal crushing of the Zulu Nation. But, as Adrian Greaves reveals, this was by no means the end of the story. The little known consequences of the division of Zululand, the Boer War, and the 1906 Zulu Rebellion are analyzed in fascinating detail. An added attraction for readers is that this long-awaited history is written not just by a leading authority but, thanks to the coauthors contribution, from the Zulu perspective using much completely fresh material. Skyhorse Publishing, as well as our Arcade imprint, are proud to publish a broad range of books for readers interested in history books about World War II, the Third Reich, Hitler and his henchmen, the JFK assassination, conspiracies, the American Civil War, the American Revolution, gladiators, Vikings, ancient Rome, medieval times, the old West, and much more. While not every title we publish becomes a New York Times bestseller or a national bestseller, we are committed to books on subjects that are sometimes overlooked and to authors whose work might not otherwise find a home.