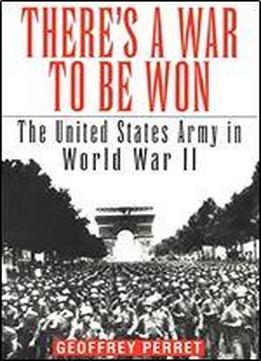 There's A War To Be Won: The United States Army In World War Ii
by Geoffrey Perret / 1997 / English / PDF

THERE'S A WAR TO BE WON is the landmark story of one of the greatest armies in history, a conscript force of amateur soldiers who had an unparalleled record of combat success. Here for the first time in one volume is the chronicle of the United States Army's dramatic mobilization and stunning march to victory in World War II. In a lively and engrossing narrative that spans theaters of operations around the world, Geoffrey Perret tells how the Army was drafted, trained, organized, armed, and led at every stage of the war. Beginning with the prescient military planners of the 1930s, he offers vivid warts-and-all profiles of the farsighted commanders who would lead the way, men like Marshall, MacArthur, Eisenhower, Ridgway, Bradley, and Patton. Drawing heavily on important new source material in major archives throughout the United States, THERE'S A WAR TO BE WON offers new insights into the wartime Army, its commanders, and its battles. A major work of American military history. "An immensely readable, well-researched history . . . Dramatic." Chicago Tribune From the Paperback edition.