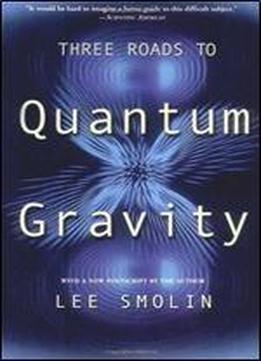 The Holy Grail of modern physics is a theory of the universe that unites two seemingly opposing pillars of modern science: Einstein's theory of general relativity, which deals with large-scale phenomena (planets, solar systems and galaxies), and quantum theory, which deals with the world of the very small (molecules, atoms, electrons). In Three Roads to Quantum Gravity, Lee Smolin provides the first concise and accessible overview of current attempts to reconcile these two theories in a final "theory of everything. " This is the closest anyone has ever come to devising a completely new theory of space, time and the universe to replace the Newtonian ideas that were the foundation of all science until the beginning of the twentieth century. Lee Smolin, who has spent his career at the forefront of these new discoveries, presents for the first time the main ideas behind the new developments that have brought a quantum theory of gravity in sight. He explains in simple terms what scientists are talking about when they say the world is made from exotic entities such as loops, strings, and black holes. As he does so, he tells the fascinating stories behind these discoveries: the rivalries, epiphanies, and intrigues he witnessed firsthand.