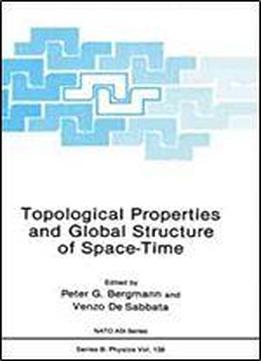 The Ninth Course of the International School of Cosmology and Gravita­ tion of the Ettore Majorana Centre for Scientific Culture is concerned with "Topological Properties and Global Structure of Space-Time." We consider this topic to possess great importance. Our choice has also been influenced by the fact that there are many quest ions as yet unre­ solved. Standard general relativity describes space-time as a four-dimensional pseudo-Riemannian manifold, but it does not prescribe its large-scale structure. Inorderto attempt answers to some topological questions, such as whether our universe is open or closed, whether it is orientable, and whether it is complete or possesses singularities, various theoretical approaches to global aspects of gravitational physics are presented here. As topological questions playa role in non-standard theories as weIl, it will be found that some of the lectures and seminar talks in this volume adopt the point of view of standard relativity, whereas others are based on different theories, such as Kaluza-Klein theories, bimetric theories, and supergravity. We have found it difficult to organize these papers into classes, say standard and non-standard theory, or models with and without singularities. One paper, by R. Reasenberg, is experimental. Its purpose was to give the theorists present an inkling of the opportunities, as weIl as the pitfalls, of experimental research in gravitational physics. Accordingly, we have arranged all contributions alphabetically, by ~first-named) author.