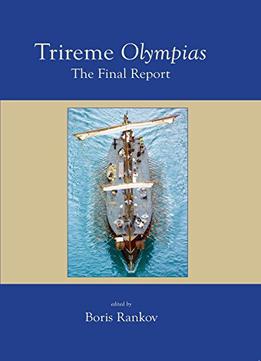 This volume represents the final publication of the Olympias project, which saw the building of a full-scale reconstruction of a 170-oared Athenian trireme of the 4th century BC and its operation in five series of sea-trials in the Aegean Sea. The first three sea-trials in 1987, 1988 and 1990 have already been published in separate volumes (the last two by Oxbow) and this completes the series with reports of the 1992 and 1994 trials. The 1992 report by Paul Lipke of Trireme Trust USA, which collaborated with the Trireme Trust in the operation of the ship, offers an alternative view of the project as a whole from that presented in previous reports. The rest of the volume is devoted to some twenty-six papers presenting more recent research on the trireme, some of them originally presented at a conference held in Oxford and Henley in 1998. One group of papers by Timothy Shaw and John Coates presents the argument for making relatively small adjustments to the hull and oar-system of Olympias , which would enable the crew to generate far more power and so match the performance under oar which is implied by the ancient sources. The papers, therefore show the detailed thinking behind the modifications proposed in the second edition of The Athenian Trireme (2000). Another set of papers offers further critiques of the project, some positive and some sceptical and hostile. A third group investigates aspects of operation and performance under both oar and sail, including slipping and launching, the ancient evidence for speed under oar and physiological aspects of the ship's "human engine". A fourth group looks at aspects of construction and maintenance and a final set of papers presents some of the latest research inspired by the project, including an investigation of the effects of ramming, a reconsideration of the evidence for the dimensions of the ancient trireme and the modelling of battle manoeuvres based on the data produced by the trials of Olympias .