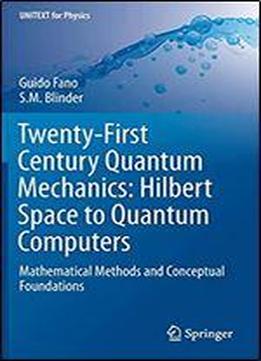 This book is designed to make accessible to nonspecialists the still evolving concepts of quantum mechanics and the terminology in which these are expressed. The opening chapters summarize elementary concepts of twentieth century quantum mechanics and describe the mathematical methods employed in the field, with clear explanation of, for example, Hilbert space, complex variables, complex vector spaces and Dirac notation, and the Heisenberg uncertainty principle. After detailed discussion of the Schrodinger equation, subsequent chapters focus on isotropic vectors, used to construct spinors, and on conceptual problems associated with measurement, superposition, and decoherence in quantum systems. Here, due attention is paid to Bell’s inequality and the possible existence of hidden variables. Finally, progression toward quantum computation is examined in detail: if quantum computers can be made practicable, enormous enhancements in computing power, artificial intelligence, and secure communication will result. This book will be of interest to a wide readership seeking to understand modern quantum mechanics and its potential applications.