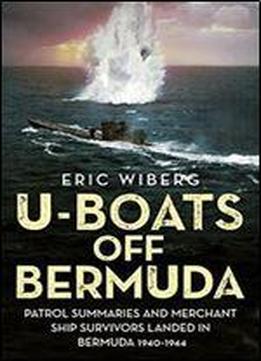 For the first time, a book exposes an obscure theatre of the First World War in great detail and comprehensively, not just in terms of geography but also from the perspectives of both Allied and Axis participants. 'U-Boats off Bermuda' provides details of specific U-Boat patrols and their commanders, as well as a general overview of the situation in the theatre of war around Bermuda. It is a detailed analysis of individual casualties, broken down by a) background of ship, b) background of U-boat, c) attack method (surface and/or submersed), d) details of survivors and their plight at sea and e) their rescue, recuperation and repatriation.Detailed maps and illustrations provide a human face to what were often tragic attacks with fatal consequences. Did you know that half a dozen German submarines came close enough to the Naval Operating Base in Bermuda to see Gibbs Hill? Or that hardy Canadians from a sunken trading schooner rowed and sailed their way to the remote island-on their own? Allied pilots based in Bermuda sank two German U-Boats, rescued dozens in daring water landings, and several crashed.