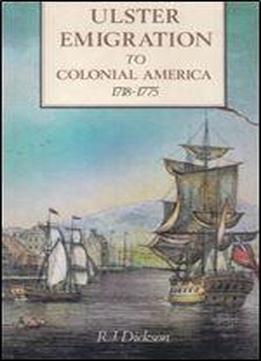 First published in 1966, R. J. Dickson's "Ulster Emigration to Colonial America, 1718-1775 "remains the acknowledged work of scholarship on migration in the eighteenth century of a quarter of a million people from Ulster to the New World. It combines detailed investigation of the economic, social, and political background to the exodus with information on the emigrant trade and an analysis of the motivations and origins of the emigrants themselves. This new edition includes a specially written introduction by Graeme Kirkham, whose researches on both sides of the Atlantic are reflected in an essay which considers recent advances in the understanding of this important mass population movement from Ireland to America.