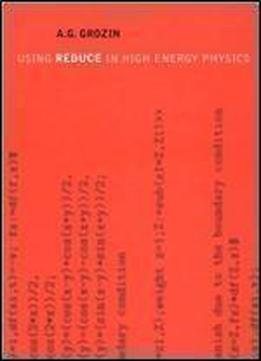 This book describes the use of the symbolic manipulation language REDUCE in particle physics. There are several general purpose mathematics packages available to physicists, including Mathematica, Maple, and REDUCE. Each has advantages and disadvantages, but REDUCE has been found to be both powerful and convenient in solving a wide range of problems. This book introduces the reader to REDUCE and demonstrates its utility as a mathematical tool in physics. The first chapter of the book describes the REDUCE system, including some library packages. The following chapters show the use of REDUCE in examples from classical mechanics, hydrodynamics, general relativity and quantum mechanics. The rest of the book systematically presents the Standard Model of particle physics (QED, weak interactions, QCD). A large number of scattering and decay processes are calculated with REDUCE. All example programs from the book can be downloaded via Internet, from http://www.inp.nsk.su/~grozin/book/. The emphasis throughout is on learning through worked examples.