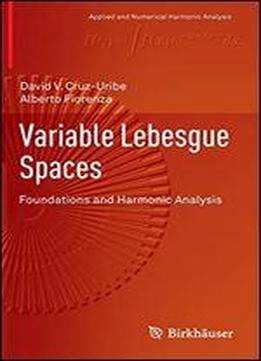 This book provides an accessible introduction to the theory of variable Lebesgue spaces. These spaces generalize the classical Lebesgue spaces by replacing the constant exponent p with a variable exponent p(x). They were introduced in the early 1930s but have become the focus of renewed interest since the early 1990s because of their connection with the calculus of variations and partial differential equations with nonstandard growth conditions, and for their applications to problems in physics and image processing. The book begins with the development of the basic function space properties. It avoids a more abstract, functional analysis approach, instead emphasizing an hands-on approach that makes clear the similarities and differences between the variable and classical Lebesgue spaces. The subsequent chapters are devoted to harmonic analysis on variable Lebesgue spaces. The theory of the Hardy-Littlewood maximal operator is completely developed, and the connections between variable Lebesgue spaces and the weighted norm inequalities are introduced. The other important operators in harmonic analysis - singular integrals, Riesz potentials, and approximate identities - are treated using a powerful generalization of the Rubio de Francia theory of extrapolation from the theory of weighted norm inequalities. The final chapter applies the results from previous chapters to prove basic results about variable Sobolev spaces.