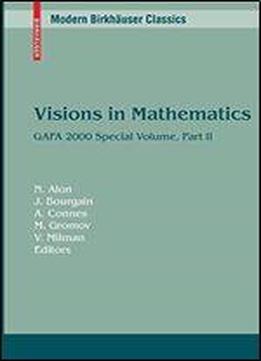 "Visions in Mathematics - Towards 2000" was one of the most remarkable mathematical meetings in recent years. It was held in Tel Aviv from August 25th to September 3rd, 1999, and united some of the leading mathematicians worldwide. The goals of the conference were to discuss the importance, the methods, the past and the future of mathematics as we enter the 21st century and to consider the connection between mathematics and related areas. The aims of the conference are reflected in the present set of survey articles, documenting the state of art and future prospects in many branches of mathematics of current interest. This is the second part of a two-volume set that will serve any research mathematician or advanced student as an overview and guideline through the multifaceted body of mathematical research in the present and near future.