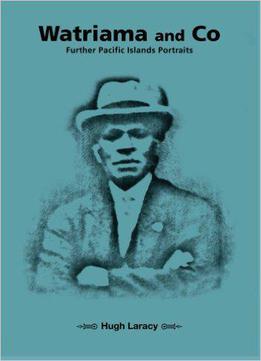 Watriama and Co (the title echoes Kipling’s Stalky and Co!) is a collection of biographical essays about people associated with the Pacific Islands. It covers a period of almost a century and a half. However, the individual stories of first-hand experience converge to some extent in various ways so as to present a broadly coherent picture of ‘Pacific History’. In this, politics, economics and religion overlap. So, too, do indigenous cultures and concerns; together with the activities and interests of the Europeans who ventured into the Pacific and who had a profound, widespread and enduring impact there from the nineteenth century, and who also prompted reactions from the Island peoples. Not least significant in this process is the fact that the Europeans generated a ‘paper trail’ through which their stories and those of the Islanders (who also contributed to their written record) can be known. Thus, not only are the subjects of the essays to be encountered personally, and within a contextual kinship, but the way in which the past has shaped the future is clearly discernible. Watriama himself features in various historical narratives. So, too, certain of his confrères in this collection, which is the product of several decades of exploring the Pacific past in archives, by sea, and on foot through most of Oceania.