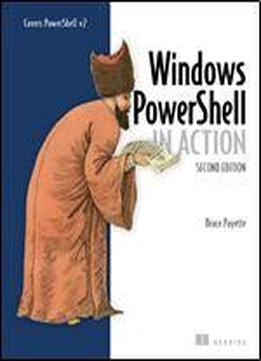 Windows Powershell in Action, Second Edition is a completely revised edition of the bestselling book on PowerShell, written by Bruce Payette, one of the founding members of the Windows PowerShell team, codesigner of the PowerShell language, and the principal author of the PowerShell language implementation. The definitive book on PowerShell V2. Windows PowerShell transformed the way administrators and developers interact with Windows. PowerShell, an elegant dynamic language from Microsoft, lets you script administrative tasks and control Windows from the command line. Because it’s a full-featured, first-class Windows programming language, programmers and power-users can now do things in a shell that previously required VB, VBScript, or C#. This expanded, revised, and updated Second Edition preserves the original’s crystal-clear introduction to PowerShell and adds extensive coverage of v2 features such as advanced functions, modules, and remoting. It includes full chapters on these topics and also covers new language elements and operators, events, Web Services for Management, and the PowerShell Integrated Scripting Environment. The First Edition’s coverage of batch scripting and string processing, COM, WMI, and .NET have all been significantly revised and expanded. The book includes many popular usage scenarios and is rich in interesting examples that will spark your imagination. This is the definitive book on PowerShell v2! What’s Inside • Batch scripting, string processing, files, and XML • PowerShell remoting • Application of COM and WMI • Network and GUI programming • Writing modules and scripts