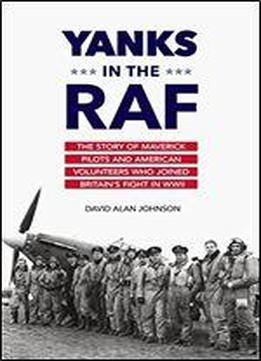 Yanks In The Raf: The Story Of Maverick Pilots And American Volunteers Who Joined Britain's Fight In Wwii
by David Alan Johnson / 2015 / English / PDF

This is the story of American volunteer pilots who risked their lives in defense of Britain during the earliest days of World War II-more than a year before Pearl Harbor, whenathe United States first became embroiled in the global conflict. Based on interviews, diaries, personal documents, and research in British, American, and German archives, the author has created a colorful portrait of this small group who were our nation's first combatants in World War II. As the author's research shows, their motives were various- some were idealistic others were simply restless and looking for adventure. And though the British air force needed pilots, cultural conflicts between the raw American recruits and their reserved British commanders soon became evident. Prejudices on both sides and lack of communication had to be overcome.aa Eventually, the American pilots were assembled into three squadrons known as the Eagle squadrons. They saw action and suffered casualties in both England and France, notably in the attack on Dieppe.a By September 1942, after America had entered the war, these now experienced pilots were transferred to the US air force, bringing their expertise and their British Spitfireswith them. As much social as military history, Yanks in the RAF sheds new light on a little-known chapter of World War II and the earliest days of the sometimes fractious British-American alliance.