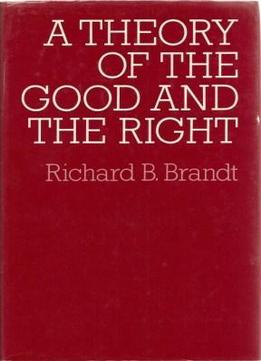 What would any rational person believe to be worth wanting or working for? Viewed from the standpoint of ethics and empirical psychology, how would such a person define and explain the morally right and the just? And what system of morals would rational people select as the best for the society? Essential to what is important in traditional philosophical inquiries, these questions and others are pursued in A Theory of the Good and the Right, Richard B. Brandt's now classic work, based on his Oxford lectures. Using a contemporary psychological theory of action and of motivation, Brandt argues that rational people would choose a utilitarian moral code that the purpose of living should be to strive for the greatest good for the largest number of people. He discusses the concept of welfare, the prospects for the interpersonal comparison and measurement of utility, the implications of the relevant form of rule utilitarianism for the theory of distributive justice, and the possibilities of conflict between utilitarian moral codes and the dictates of self-interest. Readers interested in moral philosophy, psychology, economics, and political theory will find much to ponder here.