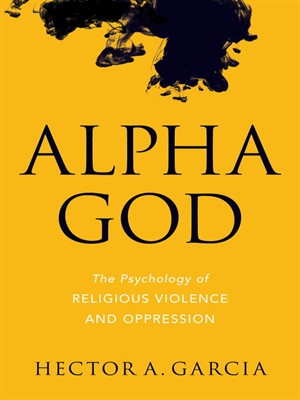 Alpha God: The Psychology Of Religious Violence And Oppression
by Hector A. Garcia / 2015 / English / EPUB

This book uses evolutionary psychology as a lens to explain religious violence and oppression. The author, a clinical psychologist, examines religious scriptures, rituals, and canon law, highlighting the many ways in which our evolutionary legacy has shaped the development of religion and continues to profoundly influence its expression. The book focuses on the image of God as the dominant male in Judaism, Christianity, and Islam. This traditional God concept is seen as a reflection of the “dominant ape” paradigm so evident in the hierarchical social structures of primates, with whom we have a strong genetic connection. The author describes the main features of male-dominated primate social hierarchies— specifically, the role of the alpha male as the protector of the group; his sexual dominance and use of violence and oppression to attain food, females, and territory; in-group altruism vs. out-group hostility (us vs. them); and displays of dominance and submission to establish roles within the social hierarchy. The parallels between these features of primate society and human religious rituals and concepts make it clear that religion, especially its oppressive and violent tendencies, is rooted in the deep evolutionary past. This incisive analysis goes a long way toward explaining the historic and ongoing violence committed in the name of religion.