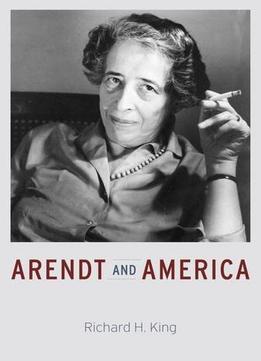 German-Jewish political philosopher Hannah Arendt (1906–75) fled from the Nazis to New York in 1941, and during the next thirty years in America she wrote her best-known and most influential works, such as The Human Condition, The Origins of Totalitarianism, and On Revolution. Yet, despite the fact that a substantial portion of her oeuvre was written in America, not Europe, no one has directly considered the influence of America on her thought—until now. In Arendt and America, historian Richard H. King argues that while all of Arendt’s work was haunted by her experience of totalitarianism, it was only in her adopted homeland that she was able to formulate the idea of the modern republic as an alternative to totalitarian rule. Situating Arendt within the context of U.S. intellectual, political, and social history, King reveals how Arendt developed a fascination with the political thought of the Founding Fathers. King also re-creates her intellectual exchanges with American friends and colleagues, such as Dwight Macdonald and Mary McCarthy, and shows how her lively correspondence with sociologist David Riesman helped her understand modern American culture and society. In the last section of Arendt and America, King sets out the context in which the Eichmann controversy took place and follows the debate about “the banality of evil” that has continued ever since. As King shows, Arendt’s work, regardless of focus, was shaped by postwar American thought, culture, and politics, including the Civil Rights Movement and the Cold War. For Arendt, the United States was much more than a refuge from Nazi Germany; it was a stimulus to rethink the political, ethical, and historical traditions of human culture. This authoritative combination of intellectual history and biography offers a unique approach for thinking about the influence of America on Arendt’s ideas and also the effect of her ideas on American thought.