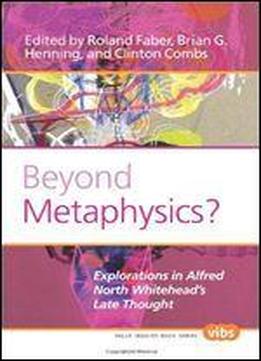 Product Description: Alfred North Whitehead's interpreters usually pay less attention to his later monographs and essays. Process and Reality is taken to be the definitive center of the Whiteheadian universe and the later works, thereby, appear to many only as applications or elaborations of themes already introduced earlier. Yet, is it also possible that the dominance of this perspective has obscured or even distorted further creative developments of Whitehead's thought? This volume offers a sort of Copernican revolution in Whitehead interpretation, methodologically and conceptually inviting its contributors to observe Whitehead's work from the perspective of his later works. The aim of this preferencing is meant not to invalidate earlier approaches to Whitehead's thought nor is the inference that the later works are more authoritative. Yet, just as the first space-based images of our planet forever changed humanity's understanding of its place in the universe, shifting the alleged center of, or even decentering of the view on, Whitehead's "philosophy of organism" to the later works, we might discover previously obscured ideas or new vistas of thought relevant not only to our current philosophical landscape, but also to the pressing issues of our fragile and endangered world. This volume invites its contributors and readers to consider whether one thereby also moves beyond metaphysics?