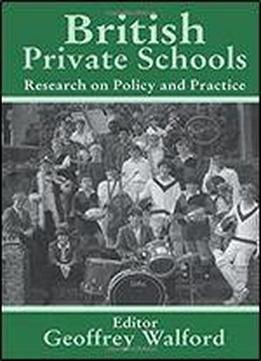 British private schools are a continuing topic of fascination for many. In particular, the leading so-called public schools have long been subjected both to criticism for their elitism and praise for their academic success. Traditionally, Conservative governments have strongly supported the private sector through special funding such as the Assisted Places Scheme, while Labour governments have reduced the private sector's support from the state and threatened to abolish it. However, the present new Labour government has reversed Labour's former oppostion to private schools and sought co-operation between the two sectors. This has led to an increasing interest in the realities of the private schools and this book brings together the best of recently conducted research on the various aspects of private schooling, through a series of specially commissioned, previously unpublished essays.