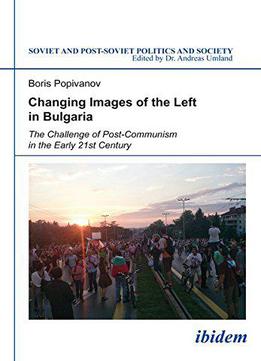 Changing Images Of The Left In Bulgaria: The Challenge Of Post-communism In The Early 21st Century
by Boris Popivanov / 2015 / English / EPUB

The violent protests that shook Bulgaria in recent years were fueled by a widespread belief that, after 25 years of transition, a new base for the political process is required. In this important new study, Popivanov provides a critical re-assessment of the role of the Bulgarian Socialist Party - arguably, the single most important political entity in Bulgaria's post-communist history. Assessing its internal problems and the challenges it faces from a new and radical grassroots Left, Popivanov asks why and how Bulgaria's Socialist Party was the only one in the Eastern bloc to remain an important political organization, after the end of communism. This timely book skillfully analyzes the current societal and political situation in Bulgaria that threatens the Socialists and argues for a complete reformulation of the concept of the 'Bulgarian Left'.