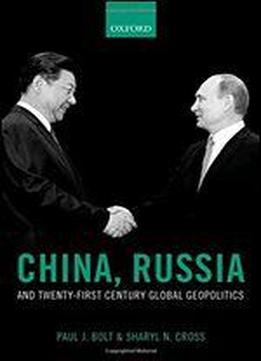 This book provides a comprehensive analysis of the Chinese-Russian bilateral relationship, grounded in a historical perspective, and discusses the implications of the burgeoning "strategic partnership" between these two major powers for world order and global geopolitics. The volume compares the national worldviews, priorities, and strategic visions for the Chinese and Russian leadership, examining several aspects of the relationship in detail. The energy trade is the most important component of economic ties, although both sides desire to broaden trade andinvestments. In the military realm, Russia sells advanced arms to China, and the two countries engage in regular joint exercises. Diplomatically, these two Eurasian powers take similar approaches to conflicts in Ukraine and Syria, and also cooperate on non-traditional security issues includingpreventing coloured revolutions, cyber management, and terrorism. These issue areas illustrate four themes. Russia and China have common interests that cement their partnership, including security, protecting authoritarian institutions, and re-shaping aspects of the global order. They are keyplayers not only influencing regional issues, but also international norms and institutions. The Sino-Russian partnership presents a potential counterbalance to the United States and democratic nations in shaping the contemporary and emerging geopolitical landscape. Nevertheless, the West is still an important partner for China and Russia. Both seek better relations with the West, but onthe basis of "mutual respect" and "equality". Lastly, Russia and China have frictions in their relationship, and not all of their interests overlap. The Sino-Russian relationship has gained considerable momentum, particularly since 2014 as Moscow turned to Beijing attempting to offset tensions withthe West in the aftermath of Russia's annexation of Crimea and intervention in Ukraine. However, so far, China and Russia describe their relationship as a comprehensive 'strategic partnership', but they are not 'allies'.