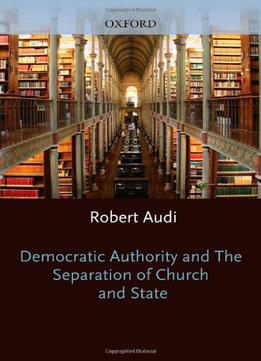 Democratic states must protect the liberty of citizens and must accommodate both religious liberty and cultural diversity. This democratic imperative is one reason for the increasing secularity of most modern democracies. Religious citizens, however, commonly see a secular state as unfriendly toward religion. This book articulates principles that enable secular governments to protect liberty in a way that judiciously separates church and state and fully respects religious citizens. After presenting a brief account of the relation between religion and ethics, the book shows how ethics can be independent of religion-evidentially autonomous in a way that makes moral knowledge possible for secular citizens–without denying religious sources a moral authority of their own. With this account in view, it portrays a church-state separation that requires governments not only to avoid religious establishment but also to maintain religious neutrality. The book shows how religious neutrality is related to such issues as teaching evolutionary biology in public schools, the legitimacy of vouchers to fund private schooling, and governmental support of "faith-based initiatives." The final chapter shows how the proposed theory of religion and politics incorporates toleration and forgiveness as elements in flourishing democracies. Tolerance and forgiveness are described; their role in democratic citizenship is clarified; and in this light a conception of civic virtue is proposed. Overall, the book advances the theory of liberal democracy, clarifies the relation between religion and ethics, provides distinctive principles governing religion in politics, and provides a theory of toleration for pluralistic societies. It frames institutional principles to guide governmental policy toward religion; it articulates citizenship standards for political conduct by individuals; it examines the case for affirming these two kinds of standards on the basis of what, historically, has been called natural reason; and it defends an account of toleration that enhances the practical application of the ethical framework both in individual nations and in the international realm.