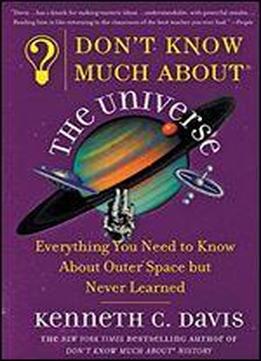 Who dug those canals on Mars? What was the biblical Star of Bethlehem? Were the pyramids built by extraterrestrials? From the ancients who charted the heavens to Star Trek, The X-Files, and Apollo 13, outer space has intrigued people through the ages. Yet most of us look up at the night sky and feel totally in the dark when it comes to the basic facts about the universe. Kenneth C. Davis steps into that void with a lively and readable guide to the discoveries, theories, and real people who have shed light on the mysteries and wonders of the cosmos. Discover why Einstein was such a genius, the truth behind a blue moon or two, the amazing secrets of Stonehenge, and even how one great astronomer lost his nose. With the fun question-and-answer format that has appealed to the millions of readers of his bestselling Don't Much About#174 series, you'll be taking off on an exciting armchair exploration of the solar system, the Milky Way, and beyond.