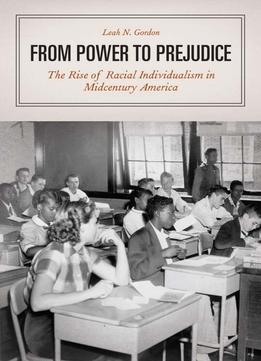 From Power To Prejudice: The Rise Of Racial Individualism In Midcentury America
by Leah N. Gordon / 2015 / English / PDF

Americans believe strongly in the socially transformative power of education, and the idea that we can challenge racial injustice by reducing white prejudice has long been a core component of this faith. How did we get here? In this first-rate intellectual history, Leah N. Gordon jumps into this and other big questions about race, power, and social justice. To answer these questions, From Power to Prejudice examines American academia—both black and white—in the 1940s and ’50s. Gordon presents four competing visions of “the race problem” and documents how an individualistic paradigm, which presented white attitudes as the source of racial injustice, gained traction. A number of factors, Gordon shows, explain racial individualism’s postwar influence: individuals were easier to measure than social forces; psychology was well funded; studying political economy was difficult amid McCarthyism; and individualism was useful in legal attacks on segregation. Highlighting vigorous midcentury debate over the meanings of racial justice and equality, From Power to Prejudice reveals how one particular vision of social justice won out among many contenders.