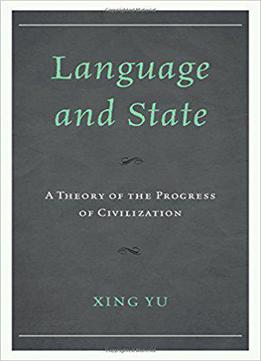 Language And State: A Theory Of The Progress Of Civilization
by Xing Yu / 2015 / English / PDF, EPUB

Is the state formed because of a natural course, the making of a social contract, initial conquest, the self-defense of the community or the formation of a class society? This book eloquently argues that the state is not simply formed in one way. It contends that the state is formed because of language. This book argues that after men commence to use language, they develop various media, which extend the distance of linguistic communication and hence underlie the growth of a large community, leading to the formation of the state and the dissolution of original tribes. As the extension of linguistic communication distance leads to the disappearance of immediacy between men, men’s mutual interaction gradually, crucially relies on linguistic communication. They share information with each other, perform interpretation between each other, express attitudes to each other, and make promises to each other. They even allow for a man to issue commands to others. The state is organized in linguistic interaction. This interaction even further provides a condition for the formation of common interest of all, a foundation for the building of the state. The state is then governed in the extension of linguistic communication distance. This may be the first political theory offered by scholars from the perspective of the philosophy of language. It is worthy of being read by those who are particularly interested in learning about the new trends of political theory in the academic community. This book is the continuity of the book Language and State: an Inquiry into the Progress of Civilization published in 2013.