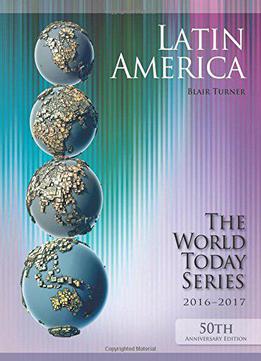 A comprehensive, timely, and entertaining account of the political, cultural, and economic dynamics of more than thirty discrete countries of the Western Hemisphere, this book is updated each year, providing students with the most recent information possible. The information is presented in an objective, balanced, non-ideological context, allowing the readers to formulate their own opinions. In addition to examining individual countries, the book views Latin America as a mosaic region as a whole and emphasizes its growing influence on the world stage. Besides providing accurate and timely information on the historical and political forces that have shaped each nation, it also examines the leading cultural figures and forces, from eighteenth-century writers to twentieth-century composers and singing stars to twenty-first-century filmmakers and actors. Finally, it describes the social and economic challenges that continue to afflict this exciting and emerging region.