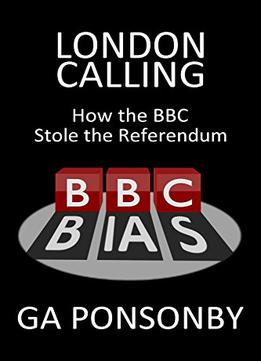 London Calling: How The Bbc Stole The Referendum
by Ga Ponsonby / 2015 / English / EPUB

The Scottish Independence Referendum captivated a nation for over three years. When Alex Salmond's SNP won a majority in the 2011 Scottish election it signalled the start of the most electric political campaign in UK history. That campaign ended on September 18th 2014 when Scots voted to remain part of the Union. But how did a small lead for Yes turn into a ten point triumph for No during the last fourteen days of the campaign? Why was a backbench Labour MP given unparalleled access to BBC airwaves in order to issue pledges he had no authority to make? Was a Scottish Labour party special advisor allowed to influence the content of BBC Scotland political programmes? The media’s role in the referendum campaign has escaped scrutiny, until now. This book shines the spotlight on the biggest media beast of all - the BBC. What it reveals will shock you. 'London Calling – How the BBC stole the Referendum', chronicles the descent of the BBC in Scotland from a once trusted broadcaster to an organisation so despised that thousands of ordinary Scots marched on its Scottish HQ in protest at what they saw as its anti-independence bias. The book takes the reader on a journey that begins with the arrival of devolution and culminates in the No campaign's triumph in the referendum on September 18th 2014. The journey is signposted by several key political events and the BBC’s coverage explored.