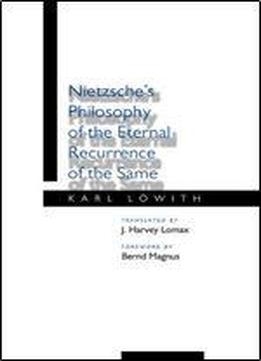 This long overdue English translation of Karl Lwith's magisterial study is a major event in Nietzsche scholarship in the Anglo-American intellectual world. Its initial publication was extraordinary in itself a dissident interpretation, written by a Jew, appearing in National Socialist Germany in 1935. Since then, Lwith's book has continued to gain recognition as one of the key texts in the German Nietzsche reception, as well as a remarkable effort to reclaim the philosopher's work from political misappropriation. For Lwith, the centerpiece of Nietzsche's thought is the doctrine of eternal recurrence, a notion which Lwith, unlike Heidegger, deems incompatible with the will to power. His careful examination of Nietzsche's cosmological theory of the infinite repetition of a finite number of states of the world suggests the paradoxical consequences this theory implies for human freedom. How is it possible to will the eternal recurrence of each moment of one's life, if both this decision and the states of affairs governed by it appear to be predestined? Lwith's book, one of the most important, if seldom acknowledged, sources for recent Anglophone Nietzsche studies, remains a central text for all concerned with understanding the philosopher's work.